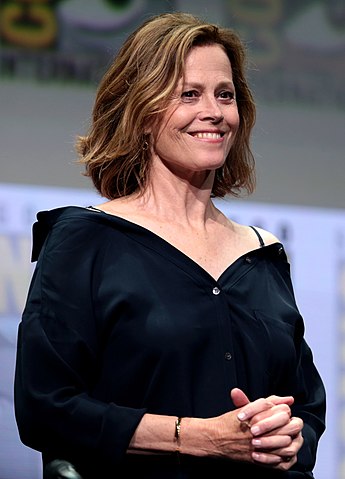 Susan Alexandra “Sigourney” Weaver (photo ©Gage Skidmore) was born on October 8, 1949 in New York, USA. Her father Sylvester Weaver was an NBC executive and her uncle Winstead Sheffield Glenndenning Dixon “Doodles” Weaver was an actor and a musician. She was a young girl when she started using the nickname Sigourney, after a character from the novel “The Great Gatsby”.

Sigourney Weaver earned a Bachelor in English from Stanford University, where she began acting, and then earned a Master in fine arts from Yale University. In the 1970s she worked in various stage plays.

Sigourney Weaver’s cinema debut took place with a very small role in “Annie Hall” (1977) but the great success came in 1979, with the release of Ridley Scott‘s “Alien” in theaters. Both the movie and the character of Ellen Ripley are memorable and the actress reprised that role over the years in various sequels.

Despite the great fame found, in the 1980s Sigourney Weaver had very different roles in other genre movies such as Peter Weir‘s 1982 drama “The Year of Living Dangerously” and the science fiction / horror / comedy “Ghostbusters” (1984). She also got personal successes winning the Golden Globe for the 1988 biopic “Gorillas in the Mist: The Story of Dian Fossey” and for the 1988 comedy “Working Girl”.

In 1984 Sigourney Weaver married the stage director Jim Simpson. The two of them had a daughter, Charlotte, born in 1990. The actress took some time to focus on her daughter and then returned to her activity again with roles in very different movies, from the historical drama “1492: Conquest of Paradise” (1992) to the comedy “Dave” (1993) and also various thrillers up to the science fiction comedy “Galaxy Quest” (1999).

In the last decade Sigourney Weaver alternated again roles in comedies such as “Heartbreakers” (2001) to drams such as “The Village” (2004) up to the one that was supposed to launch 3D for good, “Avatar” (2009). In those years she also had some of her rare television roles as a guest star in an episode of the TV show “Eli Stone” and in the TV movie “Prayers for Bobby”.

In recent years she’s been still active with roles in movies such as “Exodus: Gods and Kings” (2014) and “Chappie” (2015). She was more active than in the past in television with important roles in the miniseries “Political Animals” (2012) and “The Defenders” (2017).

Sigourney Weaver is involved in various projects at various stages of production that include some returns such as “Ghostbusters 2020” and “Avatar” sequels. She proved to be a versatile actress but many call her the science fiction queen for the successes she had in that genre and above all for the importance of her role as Ellen Ripley.