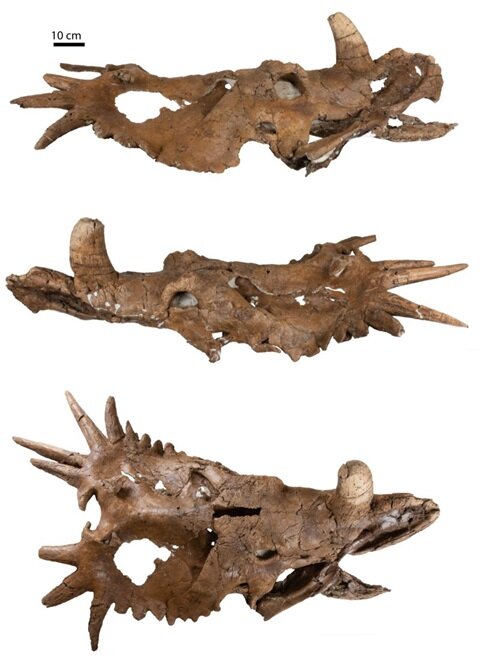 An article published in the journal “Cretaceous Research” reports a study of a fossil skull of Styracosaurus albertensis, a herbivorous dinosaur that lived in today’s North America about 75 million years ago, in the Cretaceous period. A team of researchers led by Professor Robert Holmes of the University of Alberta, Canada, examined this well-preserved fossil noting that its horns were asymmetrical. Previously, no skull attributed to the genus Styracosaurus was complete enough to see that asymmetry. This discovery could lead to various reclassifications of fossils that over time were attributed to other species of the genus Styracosaurus and later even to other genera.

Styracosaurus albertensis was a herbivorous dinosaur belonging to the ceratopsid (Ceratopsidae) family. It had a length that could be over 5 meters, a height close to 2 meters and a weight of around 3,000 kg, measures far from those of the giant herbivores but still noteworthy. Among its characteristics there was a bone collar with 4 or 6 horns. After studying a new well-preserved skull belonging to this species, those horns seem to be even more interesting.

In 2015, Scott Persons of the University of Alberta’s Department of Biological Sciences discovered the new skull. The conservation level showed that the horns of this animal were asymmetrical. The image (Courtesy Scott Persons. All rights reserved) shows the skull seen from all sides. The fossil was also subjected to a laser scan that allowed to create a 3D model that can be examined at the computer.

Among today’s animals, deer may have asymmetric antlers, but paleontologists didn’t think this could be true of these dinosaurs. The fossil cataloged as UALVP55900 shows that the differences between the two sides of this Styracosaurus albertensis skull can have considerable differences.

This discovery could lead to a new revision of the classification of other fossils. For example, the discovery of a partial parietal bone in 1928 with characteristics similar to those of Styracosaurus albertensis led two years later to the attribution to a different species, which was named Styracosaurus ovatus. After the discovery of more partial fossils, a 2011 study led to the creation of the genus Rubeosaurus. A further complication is due to the attribution of another fossil to a species named Brachyceratops montanensis in 1914 which could actually be a juvenile form of Rubeosaurus. Actually, the specimens attributed to these species could all be Styracosaurus albertensis with diverse horns.

Scott Persons nicknamed the specimen Hannah. There’s no real way to check this Styracosaurus albertensis’ gender, it’s simply the name of Persons’ dog. The important information is what it provided on the characteristics of these dinosaurs.

Previous Post: The Delirium Brief by Charles Stross
Next Post: Twitter announces the elimination of inactive accounts but promises to save the accounts of deceased users