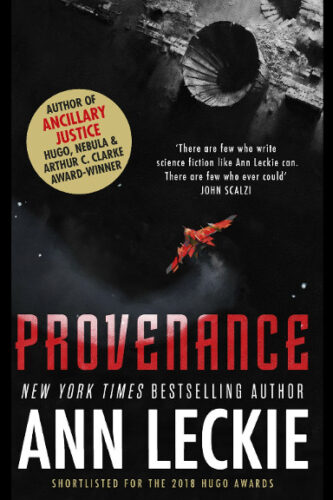 The novel “Provenance” by Ann Leckie was published for the first time in 2017.

Ingray Aughskold spent all of her money to get Pahlad Budrakim out of the prison planet where he was exiled from Hwae and for the journey on Captain Tic Uisine’s spaceship to bring them home with a fake ID for Pahlad. Her plan is to find the precious vestiges whose replacement with fakes doomed Pahlad.

When Ingray Aughskold awakens Pahlad Budrakim from the cryogenic sleep he was put into after his breakout, she gets a nasty surprise when the person she was handed over claims to be someone else. Ingray has no choice but to heavily rethink her plans because failure would mean losing any hope of succeeding her adoptive mother in her political office. When they arrive on Hwae, however, things just start getting complicated.