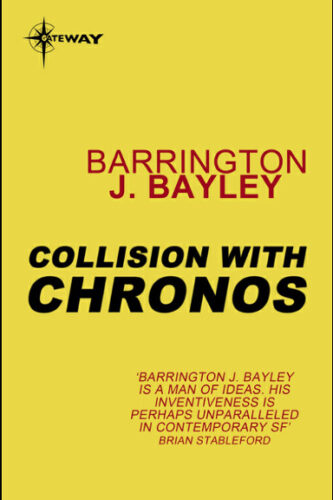 The novel “Collision with Chronos”, also known as “Collision Course”, by Barrington J. Bayley was published for the first time in 1973.

For archaeologist Rond Heske, being summoned by the authorities is a great concern because Titan laws are strict. The relief that comes from being asked for his professional advice doesn’t last long because he’s shown photos of some ruins dating back to the times of one of the wars fought against invading aliens that seem to rejuvenate over time. As if that weren’t enough, he’s revealed that an enemy time machine has been found and he must participate in a time exploration.

The shocks for Heske aren’t over as his most trusted collaborator turns out to be part of the Panhumanic League, the organization that leads the resistance to the Titans and preaches equality for all humans, even the ones considered deviants by the regime. Heske ends up involved in a mission that must shed light on an invasion attempt from the future and comes into contact with another civilization whose citizens live in two timelines that are out of phase.