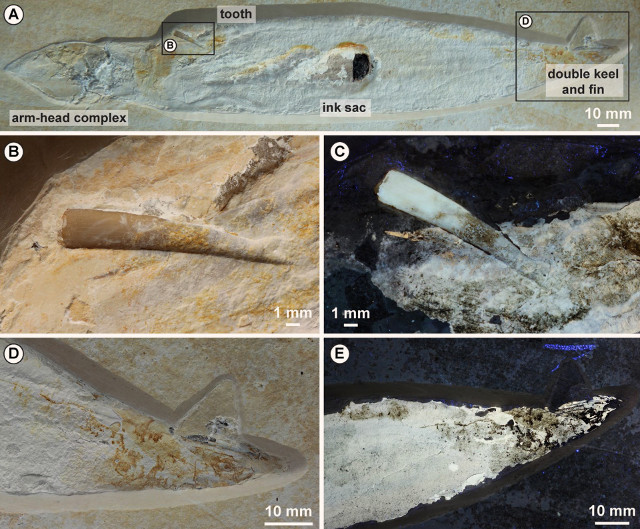 An article published in the journal “Scientific Reports” presents a study that brings evidence that some pterosaurs ate cephalopods. A team of researchers led by paleontologist René Hoffmann of the University of Ruhr in Bochum (Ruhr-Universität Bochum, RUB) examined fossils of a squid-like animal of the species Plesioteuthis subovata that lived about 150 million years ago, in the Jurassic period, preserved with a tooth of a pterosaur of the species Rhamphorhynchus muensteri. This discovery provides information on this pterosaur’s eating habits and the fact that that cephalopod lived near the surface of the water.

Pterosaurs – order Pterosauria – appeared in the Late Triassic period, almost 230 million years ago. These reptiles were the first flying vertebrates and were very successful because they diversified occupying a number of niches during the Cretaceous period with very variable sizes so that their wingspan could go from 50 centimeters to more than 10 meters. Rhamphorhynchus muensteri was relatively small, with a wingspan of less than 2 meters, and fed mainly on fish and other small aquatic animals.

The two currently recognized species of the genus Plesioteuthis, P. prisca and P. subovata, were first described in the 19th century thanks to discoveries in the Altmühltal Formation, a fossil deposit near the city of Solnhofen, Germany. Exceptionally preserved fossils have been found there, to the point of including soft-bodied organisms such as cephalopods to which the genus Plesioteuthis belongs. These molluscs were similar to today’s squid, with a gladius, the structure commonly known as squid bone, which could be up to 30 centimeters long. A specimen of P. subovata revealed the presence of what turned out to be a pterosaur tooth.

René Hoffmann’s team examined the Plesioteuthis subovata fossil under ultraviolet light and this allowed to establish that the pterosaur tooth is embedded in the cephalopod fossil, whose soft body is now phosphated, as it underwent a particular process that led to its fossilization. This means that the fact that the fossils of these two animals were found together is highly unlikely to be due to chance. The shape of the tooth showed remarkable similarities with those of Rhamphorhynchus muensteri and was attributed to an adult individual of this species.

Rhamphorhynchus muensteri probably fed on aquatic animals by capturing them as they flew directly over the water surface. The bottom image (Courtesy Christian Klug / Beat Scheffold. All rights reserved) shows an artistic reconstruction of that type of behavior with the capture of a specimen of Plesioteuthis subovata.

This research shows the first direct evidence of a predator-prey interaction between pterosaurs and cephalopods. It’s unlikely that a Rhamphorhynchus muensteri broke a tooth trying to eat a carcass, also because it would have ended up on the bottom of the water after the animal died. Basically, everything suggests an unsuccessful attempt to catch prey. It’s not clear whether the Plesioteuthis subovata died as a result of the wound it suffered or it survived with the tooth of the pterosaur getting stuck in its body.

A lucky discovery offered new information on Rhamphorhynchus muensteri’s predatory behaviors, their diet and the fact that Plesioteuthis subovata normally lived close to the surface of the water. It’s impossible to completely reconstruct the story of that hunt that remained unsuccessful, but these rare cases are always useful because they offer a sort of snapshot of ancient events.