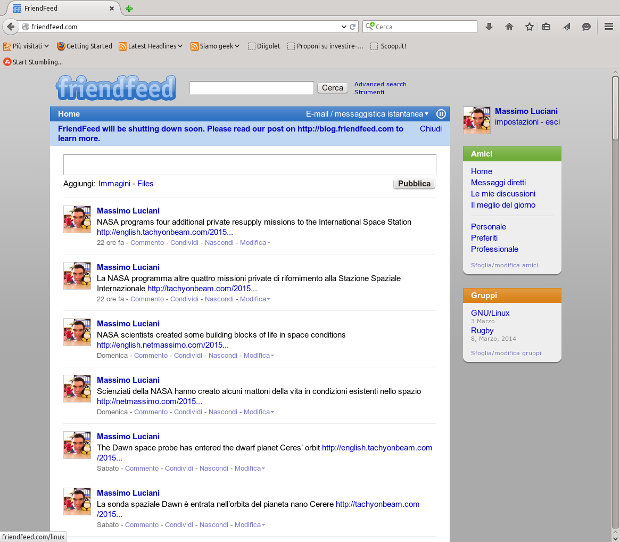 With a bare statement, the FriendFeed team announced that the social network will be shut down. From this week it doesn’t accept new registrations but users can keep on using FriendFeed for another month. On April 9, the social network will be shut down so its services will be no longer available. The cause is the decline of users, due to the fact that the development of the services had ceased after the acquisition by Facebook.

Facebook founder Mark Zuckerberg is one of the people who seek new year’s resolutions. He’s not an ordinary person and his focus is always on the Internet so it was almost inevitable that sooner or later he’d crowdsourcing to find some new ideas for his personal challenge. That’s what he did at the end of 2014 to find a new year’s resolution for 2015.

Facebook yesterday officially unveiled the new version of Atlas, the advertising platform that, according to the information provided, was completely renovated to meet the challenges of today’s marketing. The goal is to reach people on various devices and bridge the gap between online impression and offline purchases. Facebook has announced it has reached an agreement for the purchase of Oculus VR, Inc., producer of the virtual reality head-mounted display Oculus Rift, for a total of about $2 billion. The figure includes $400 million in cash and 23.1 million shares of Facebook common stock. The agreement also includes an additional $300 million in cash and shares based on the achievement of certain goals that weren’t specified in the press release.

Facebook has announced the acquisition of WhatsApp, the famous instant messaging application for mobile devices. The price that Mark Zuckerberg’s social network will pay is $16 billion of which $4 billion in cash and $12 billion in Facebook shares. An additional $3 billion in restricted Facebook shares will be paid as a bonus tied to WhatsApp’s founders and employees that will vest over four years subsequent to closing. WhatsApp Inc. CEO Jan Koum will enter Facebook’s board of directors.