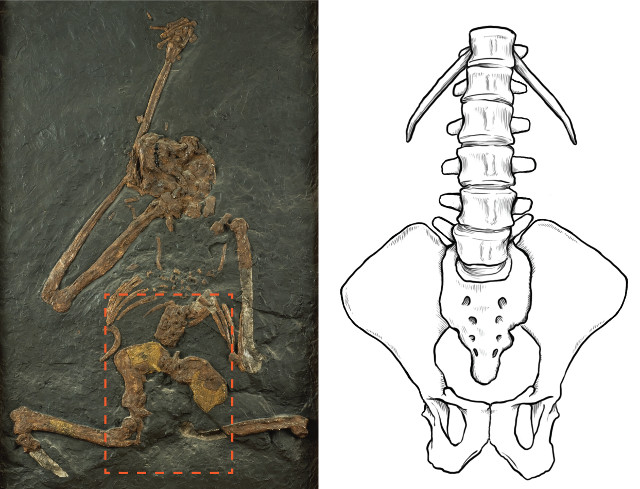 The species Oreopithecus bambolii has been known since 1871, when the first fossils were discovered in Massa Marittima, in the Grosseto province, and described the following year by the French paleontologist Paul Gervais. In 1958 a skeleton attributed to this species was discovered in the lignite mine of Baccinello, again in the Grosseto province. In 1994, some bones attributed to this species were discovered near Porto Torres, in Sardinia’s Sassari province.

Over the course of time, various studies have been conducted of Oreopithecus bambolii ending up at the center of controversies for the problems related to its classification and interpretation of its anatomical characteristics. This species is the most recent of the hominoids (Hominoidea), a taxonomic superfamily that includes apes and humans, known in Europe but it wasn’t clear whether it descended from older European species such as one of the genus Dryopithecus or from an African species whose descendants migrated north. Its locomotion was also the focus of research with various theories. For these reasons, it was nicknamed the enigmatic hominoid.

This new study focused on the individual discovered in Baccinello, cataloged as IGF 11778 and at the time nicknamed Sandrone, because it is the most complete fossil of Oreopithecus bambolii. The anatomical characteristics of the lower torso, those related to locomotion, have been compared with those of other primates to try to offer at least some final answers. The image (Courtesy S. Bambi (University of Florence, Florence, Italy) and Kayla Younkin (American Museum of Natural History, New York, NY). Tutti i diritti riservati) shows the fossil IGF 11778 and a reconstruction of its torso.

The researchers found some similarities between Oreopithecus bambolii and the siamang (Symphalangus syndactylus), a modern gibbon, an arboreal species that lives in the forests of Indonesia, Malaysia and Thailand. However, certain characteristics indicate that its locomotion was bipedal but not upright like the human one and wasn’t a good climber.

The environment in which Oreopithecus bambolii lived was swampy, therefore its type of locomotion was suitable for it. The evolutionary pressures were very different from those of its African cousins ​​therefore its bipedal posture could be a parallel evolution with that developed in human beings’ ancestors.

The developments of various scientific disciplines and technologies that help various types of research is a significant aid for studies such as that on Oreopithecus bambolii. Despite this, the answers offered by this study are not necessarily final.

Previous Post: The CRISPR-Cas9 genetic manipulation system used in cancer research
Next Post: People of The Sea aka Dolphin Island: A Story of the People of the Sea by Arthur C. Clarke