Robotics company Boston Dynamics has released a video to celebrate what it hopes is a better year showing the ability of some of its robots to dance to the tune “Do You Love Me?”. In particular, two humanoid robots demonstrate their balancing skills by remaining on one leg at certain moments. In some parts of the video they’re accompanied by a quadrupedal robot and another robot that moves on two wheels. 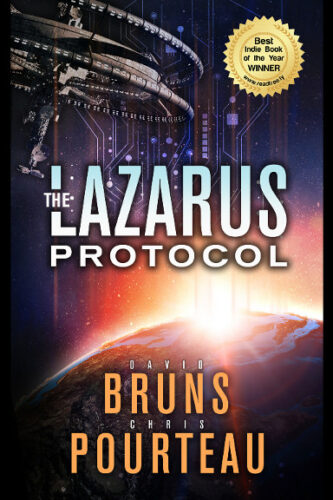 The novel “The Lazarus Protocol” by David Bruns and Chris Pourteau was published for the first time in 2018. It’s the first book in The SynCorp Saga series.

When her aunt Xi arrives on the Moon to meet her in person, Ming knows the reason must be really important. The death of her father is certainly a big deal, as is the succession at the helm of the corporation the man founded many years earlier. To her surprise, Ming discovers that her father wanted her to be his successor.

Anthony Taulke’s plan to terraform Mars is very ambitious, but seems simpler than repairing the damage inflicted on the Earth’s environment in previous centuries. At least until the US president offers him his support in a plan to save the Earth.

“Su’Kal” is the 11th episode of the 3rd season of the TV show “Star Trek: Discovery” and follows “Terra Firma, Part 2”.

The discovery of a Kelpien starship in the Verubin Nebula is followed by the detection of a life form on board. The area could be the origin of the Burn, so the USS Discovery goes to investigate finding a planet made practically of dilithium. Saru (Doug Jones), Michael Burnham (Sonequa Martin-Green), and Dr. Hugh Culber (Wilson Cruz) go in search of the survivor and find Su’Kal (Bill Irwin), but find a really strange situation while on the USS Discovery they have to keep d eye the maneuvers of Osyraa (Janet Kidder).

Writer James Gunn passed away yesterday, December 23, 2020. Last Saturday he was taken to the emergency room for heart problems, and those are probably what caused his death. Statements from the University of Kansas, where he was a professor emeritus, mentioned generic natural causes. The novel “Touched by an Angel” by Jonathan Morris was published for the first time in 2011.

After eight years, Mark Whitaker hasn’t yet recovered from the death of his wife Rebecca. One day he receives a letter he wrote himself but doesn’t remember it at all. That’s even stranger because the letter contains a series of instructions and tells him that he can save Rebecca. Mark is still trying to figure out that letter’s origin when he’s touched by a Weeping Angel and finds himself 15 years in his past.

After the initial disorientation, Mark realizes the opportunity he’s having and starts planning his new life with the ultimate goal of reaching the day of the car accident in which Rebecca died. The effects of his activity draw the attention of the Eleventh Doctor, who comes to investigate along with Amy and Rory. When he finds out what Mark is planning, he tells him not to change anything and the presence of Weeping Angels clearly shows that they want a paradox to happen to get its energy.