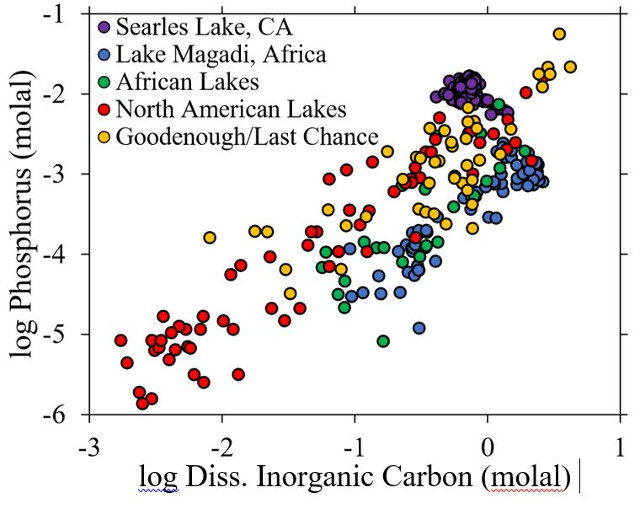 An article published in the journal “Proceedings of the National Academy of Science” reports a study on carbonate-rich lakes as possible places where life on Earth originated. Jonathan Toner and David Catling of the University of Washington measured the concentration of phosphorus, an element crucial for various cellular processes, in carbonate-rich lakes, detecting phosphorus concentrations up to 50,000 times higher than those present in seawaters, in river waters and also in those of other lakes. The two researchers found a link between an abundance of carbonates and phosphorus, a discovery that offers a possible solution to the problem of the shortage of phosphorus in other possible places of origin of life.

Phosphorus is an element existing in scarcity in nature, often linked to other elements such as calcium and in that form impossible to use for life forms or complex prebiotic molecules. This made it difficult to explain the presence of phosphates, crucial in the formation of life forms, in the possible places where life on Earth originated. Jonathan Toner and David Catling have been studying problems related to the formation of early life forms for some time and already in the past indicated lakes with certain characteristics as possible life nurseries. For example, in an article published in September 2019 in the journal “Geochimica et Cosmochimica Acta” they reported an interesting link between lakes and cyanide, a compound which is also critical in the origin of life.

The new research published in “Proceedings of the National Academy of Science” is focused on the phosphate problem showing that in certain lakes even today the concentration of phosphorus can be high up to really extraordinary levels, up to 50,000 times higher than that of seas, rivers and lakes that don’t have those characteristics.

The image (Courtesy Toner et al/PNAS) shows a graph of the lakes examined. The colored dots indicate the phosphorus levels measured in various carbonate-rich lakes in the world. The highest levels were found in the lakes indicated by the yellow dots.

Phosphorus-rich lakes are for example Mono Lake in California, Lake Magadi in Kenya and Lonar Lake in India. These are lakes also rich in carbonates, a common element that led Jonathan Toner and David Catling to carry out experiments to understand the link between them and find an explanation of the high concentration of phosphorus. Tests conducted with various concentrations of the various compounds showed that in carbonate-rich waters, they bind to calcium before phosphorus does, leaving at least part of it unbound.

When water evaporates in the dry seasons, especially near the coasts, it leaves even higher levels of phosphates, sometimes in pools separated from the lake. Under such conditions, when the Earth was very young and had an atmosphere with higher amounts of carbon dioxide, the conditions were ideal for creating such lakes. Volcanic activity was much higher, therefore volcanic rocks could react with carbon dioxide generating carbonates.

Jonathan Toner and David Catling’s arguments regarding the favorable possibilities for prebiotic chemistry and the formation of the first life forms in lakes rich in carbonates and phosphorus are very interesting. They’re probably not the last word on the subject but show a possible mechanism that leads to having enough phosphorus to obtain the chemical reactions necessary for life to emerge.

Previous Post: People of The Sea aka Dolphin Island: A Story of the People of the Sea by Arthur C. Clarke
Next Post: Isaac Asimov was born 100 years ago