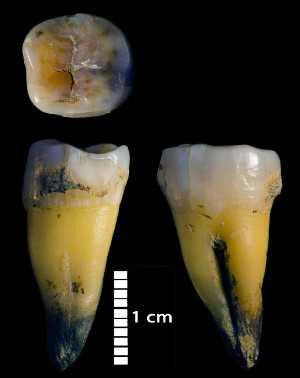 An article in the journal “Nature” reports a genetic study on some human beings who lived in Bacho Kiro Cave, in today’s Bulgaria, the most ancient modern humans dated so far with reasonable certainty. A team of researchers managed to obtain DNA from the available bones, which was analyzed at the Max Planck Institute for Evolutionary Anthropology in Leipzig, Germany. The comparison with the genetic characteristics of today’s European and Asian populations shows how those ancient humans spread and that they had some Neanderthal ancestors.

During the 1970s, excavations conducted in the Bacho Kiro Cave led to the discovery of ancient human remains, however, they were lost. In 2015, new excavations in the same sections of the cave led to the discovery of other remains. In both cases, they were fragments of bones and teeth, which made it difficult to tell whether they were Homo sapiens or Neanderthals. Fragments of artifacts were also discovered in the same cave and dating has been carried out on all the remains. The result is that radiocarbon dating indicates that the remains are aged between 46,940 and 43,650 years. The researchers were able to extract DNA and this allowed for another type of dating that indicates an age between 44,830 and 42,616 years. One of the individuals found belonged to a population that lived in that area much later, about 35,000 years ago.

The DNA examination obtained for that research at the Max Planck Institute for Evolutionary Anthropology continued to try and figure out who these ancient humans were. Certain characteristics of the artifacts were similar to those of others attributed to Neanderthal populations but the DNA of the inhabitants of Bacho Kiro Cave indicates that they were Homo sapiens. Now, this new genetic study offers more complex answers.

In recent years, there has been a great development in paleogenetics, the branch of genetics that studies the DNA of extinct species. Many genetic and paleogenetic studies found interbreedings between different species of hominins, and the Homo sapiens of the oldest Bacho Kiro population had DNA containing several Neanderthal genes as well. According to the researchers, the long stretches of DNA inherited from the Neanderthals indicate that those ancestors were between five and seven generations earlier.

The top image (Courtesy MPI-EVA/Rosen Spasov. All rights reserved) shows a lower molar of one of the modern humans discovered in Bacho Kiro Cave. The analysis of his DNA shows that one of his ancestors within the sixth generation was a Neanderthal.

The discovery of this ancient interbreeding between Homo sapiens and Neanderthals is just the latest of many known today. This new finding suggests that interbreedings between the two species were common after Homo sapiens immigrated to Europe. Professor Svante Pääbo, who coordinated the genetic research and is one of the most important paleogeneticists in the world, explained that the research results indicate that the first modern humans arriving in Eurasia mixed frequently with the Neanderthals and only later the arrival of larger groups of modern humans led to a replacement of the Neanderthals.

This study also offers information on the relationships between Bacho Kiro’s people and various populations who live today in Europe and, surprisingly, even more in Asia and America. Together with previous studies, it helps to reconstruct the complex history of humanity, made up of migrations and interbreedings between populations, even belonging to different species.