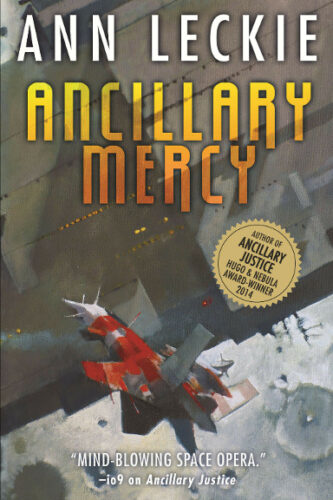 The novel “Ancillary Mercy” by Ann Leckie was published for the first time in 2015. It’s the third book in the Imperial Radch series and follows “Ancillary Sword”. It won the Locus Award as the best novel of the year.

The situation seems stable at Athoek Station but Breq knows that things can change quickly. The first unexpected event comes from inside the station with the discovery of what appears to be the ancillary of a starship that hid far beyond the borders of the Radch three millennia earlier. The arrival of Translator Zeiat, a new Presger emissary, brings new risks of instability.

For Breq, the real moment of crisis comes with the part of Anaander Mianaai, the Lord of the Radch, the enemy of the part that sent Breq to the Athoek system. The enemy forces have far superior firepower but Breq doesn’t intend to leave the system’s inhabitants in danger and is forced to improvise a plan to face the Lord of the Radch.