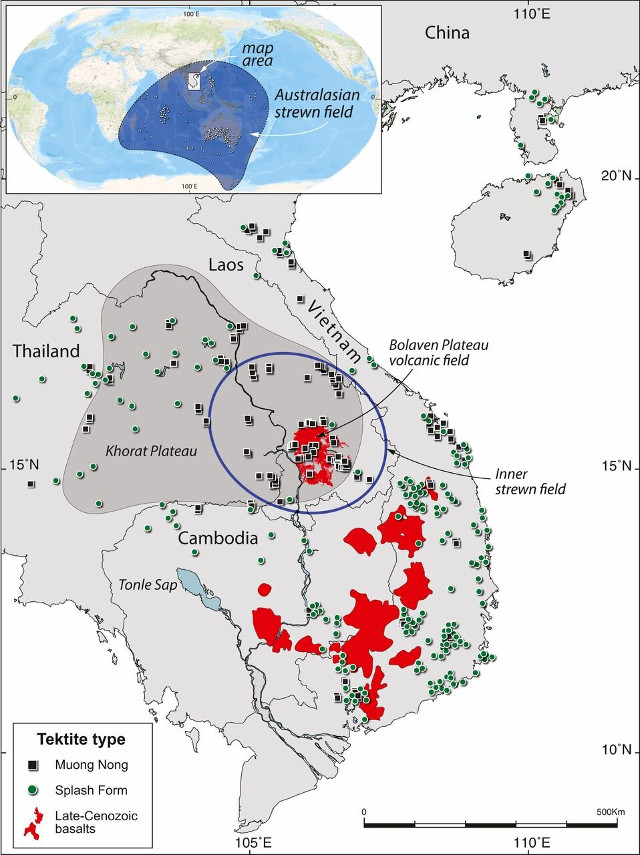 In the Mesozoic era there was an active volcanic complex in today’s Bolaven plateau in Laos. Much more recently from a geological and astronomical point of view, a meteorite struck the Earth generating glassy debris such as those known as tektites in an area estimated at around 20% of the Earth’s eastern hemisphere. Geological surveys indicated that there must have been a large crater somewhere in Indochina but the exact location remained unknown or at least so far, as a new study concludes that it’s located in Laos, in the Bolaven volcanic complex.

The image (Proceedings of the National Academy of Sciences) shows a map of the Bolaven plateau with the region where the researchers identified the probable meteorite’s impact point circled in blue. In the global map at the top, the blue area is where the impact debris scattered.

To identify the probable meteorite’s impact point, the researchers collected various types of evidence. The first concerns the geochemistry of tektites near the volcanic complex because according to the researchers it implies the presence of basalts in the impact site. The second type concerns the geological mapping and dating of the basaltic lavas that existed before and after the impact period, which show the changes that occurred in that period. Gravitational measurements carried out in the Bolaven volcanic complex show an anomaly that suggests the presence of a crater between 13 and 17 kilometers in diameter. The last type of evidence comes from crudely layered sandstone and mudstone boulders 10 to 20 kilometers from Bolaven volcanic complex, which seem to have been thrown there by the force of the impact.

An astronomical event that occurred about 790,000 years ago was reconstructed through a complex geological study. The answers offered by the researchers can now be checked, for example with new analyzes of the materials existing in the debris dating back to the time. The impact is estimated to have incinerated planets and animals within a radius of around 500 kilometers. Evaluations of such ancient events can help understand what would happen today if a large meteorite struck the Earth.