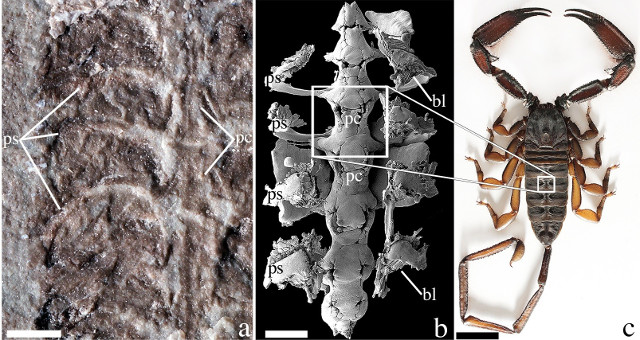 An article published in the journal “Scientific Reports” illustrates the identification of the oldest known scorpion species, which lived about 437 million years ago, in the Silurian period. A team of researchers named it Parioscorpio venator after examining fossils discovered in a quarry in Wisconsin in 1985. This species had some anatomical features that are practically identical to those of modern scorpions but the most interesting discovery is in the respiratory structures that indicate that it could live on the mainland. This is the oldest evidence that an animal could survive out of the sea and indicates that at the time at least a part of arachnids had already colonized the mainland.

Arachnids (Arachnida) are a class within the phylum of arthropods which is mainly composed of spiders, followed as the number of species by the order of scorpions (Scorpiones), which are characterized by pincer-shaped pedipalps and a segmented tail that ends with a stinger. Scorpion fossils were discovered in deposits dating back to the Silurian period which suggested that they were marine animals. However, recent research is offering a different idea and the one published in “Scientific Reports” indicates that the oldest identified scorpion was an amphibian or even a land animal.

The scorpion that was named Parioscorpio venator was a small arachnid with a length of approximately 2.5 centimeters. It was part of the so-called Waukesha Biota, named after a nearby location, in Wisconsin, USA. The site is one of those where fossils have been found, in this case dating back to the Silurian period, very well preserved, including many arthropods.

Two practically complete fossil specimens of Parioscorpio venator were studied after remaining in a museum at the University of Wisconsin for over thirty years. There they were found by Andrew Wendruff, one of the authors of this research, who was a doctoral student and is now a professor at Otterbein University in Westerville. At the time Wendruff was a student of Loren Babcock, a professor at Ohio State University, another of the authors of this research. The two of them recognized them as scorpion fossils but didn’t know how close they were to the roots of scorpions’ evolutionary history.

The dating of the Parioscorpio venator fossils was indirect, based on that of other fossils discovered in the same geological layer at the site containing the Waukesha Biota. The result is that their age is between 436.5 and 437.5 million years, a few million years older than the fossils that held the record, discovered in Scotland.

The fossils of Parioscorpio venator were examined under a microscope, also taking high resolution photos from different angles. This made it possible to examine the internal organs, which are also well preserved in the rock. In particular, the remains of the respiratory and circulatory systems were examined, which have a structure similar to that of modern scorpions. This result indicates that those Silurian scorpions could breathe on land. However, some characteristics are similar to those of marine arthropods such as horseshoe crabs, distant relatives of arachnids.

The image (Courtesy Andrew Wendruff) shows one of the fossils discovered in Wisconsin in 1985 on the left. The respiratory and circulatory organs are highlighted in the middle and are almost identical to those of a modern scorpion like the one shown on the right, which belongs to the species Hadogenes troglodytes.

The information obtained by examining the fossils of Parioscorpio venator offer no conclusive answers regarding the environment in which this scorpion lived. It’s possible that it lived mainly in the water and ventured on land to hunt other primitive arthropods such as those discovered among the fossils of the Silurian period. In essence, it’s not yet clear when the first animals started living on land but these scorpions represent a possible transition period from water to land.

Previous Post: Prisoner of the Daleks by Trevor Baxendale
Next Post: Take Back the Sky by Greg Bear