An article published in the journal “Scientific Reports” describes the identification of a new species of marine reptile classified as part of the thalassosaur order that lived in today’s Alaska over 200 million years ago, in the Norian, an age of the Triassic period. A team of researchers led by Patrick Druckenmiller of the University of Alaska Fairbanks (UAF) named it Gunakadeit joseeae after examining the fossil discovered in Alaska in 2011. The discovery of a new species offers new information on a group of reptiles that are available. few fossils for a family tree still under discussion.

Thalattosaurs (Thalattosauria) are a taxonomic order of marine reptiles that lived in the Triassic period. The first species was described in 1904 and named Thalattosaurus alexandrae, hence the name of the entire order. This animal’s body had characteristics similar to a lizard and some indicating a marine life, in fact the name of the genus and of the order literally means sea lizard. Over the next century, more fossils of animals with similar characteristics were discovered in various parts of the world that formed a rather rich family tree.

The exact composition of the order of thalassosaurs, the relationships within it and those with other groups of reptiles are still the subject of various discussions. Paleontologists agree on the inclusion of thalassosaurs in the diapsid (Diapsida) group and little else. The problem is the classic one in the field of paleontology: scarcity of fossils and studies on the available fossils often dating back decades. The authors of this research recognize the Thalattosauroidea group among others and classified the new genus and new species that they named Gunakadeit joseeae within it.

The fossil attributed to the new species, cataloged as UAMES 23258, was discovered in Southeast Alaska in 2011 at a time of extreme low tide which allowed the exploration of rocks that are generally underwater. It’s an almost complete skeleton, the most complete thalassosaur discovered so far in North America, with part of the tail and some parts of the limbs missing. It was a rather small reptile, less than a meter long, while some species of thalassosaurs could be longer than four meters.

The very pointed shape of Gunakadeit joseeae’s snout suggests that it used it to search for soft-bodied prey in craks and crevices in coral reefs. It’s a specialized predation type that might eventually have caused its extinction. The most likely theory about the disappearance of the whole thalassosaur order is that they were specialized animals that found nourishment in shallow waters and were victims of climate mutations that caused changes in the environment and in their food sources. It’s possible that competition from other groups of marine reptiles such as ichthyosaurs contributed to their decline.

Thalattosaurs are not as famous as other groups of marine reptiles and significantly less than dinosaurs but they played a significant role in the Triassic seas. The limited amount of fossils makes it difficult to confirm the reasons for their extinction, but Gunakadeit joseeae also shows a specialization that suggests a link with the climate and environment changes that occurred at the end of the Triassic. 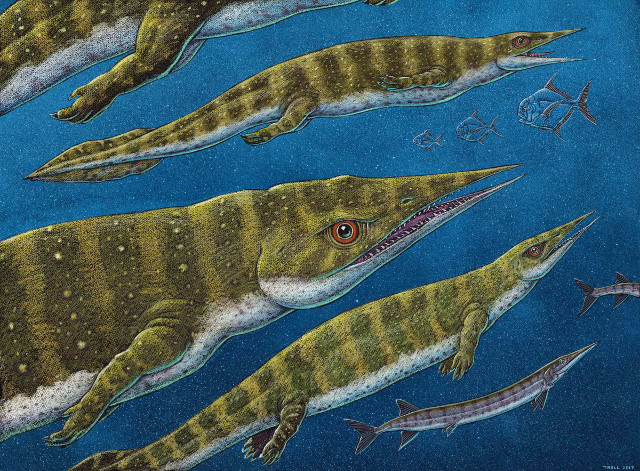 Previous Post: Century of the Manikin by E.C. Tubb
Next Post: Star Trek: Picard – The End is the Beginning