An article published in the journal “Peer J” reports the identification of the largest dinosaur species that lived in today’s Australia. A team of researchers named Australotitan cooperensis this dinosaur that lived in the Cretaceous period, between 92 and 96 million years ago, and included it in the group of titanosaurs, the giant long-necked herbivores that include the largest animals that lived on land. The identification represents the culmination of a long task on the scattered bones of various specimens.

The history of the identification of Australotitan cooperensis began in 2005 with the discovery of some fossil bones in the Winton Formation, in the Australian state of Queensland. The excavation of the bones represents only the first of a long series of steps in a paleontological work. This is even truer in this case because the paleontologists from the Queensland Museum and the Eromanga Natural History Museum who collaborated on this work had to make sure that the specimens discovered didn’t belong to a previously identified species.

The bones discovered in the Winton Formation were compared with those of other Australian dinosaurs and of specimens discovered on other continents. In order to be able to compare the anatomical details of different specimens, paleontologists conducted a scan of the fossils to obtain 3D reproductions. These technologies are increasingly used in the field of paleontology precisely because they greatly help the examinations of fossils. In this case, it’s the examination of huge bones that would be difficult to handle. The scans also allow the creation of physical reproductions of the fossils, such as the humerus of the specimen nicknamed Cooper shown in the bottom photo (Courtesy Rochelle Lawrence. All rights reserved) together with Dr. Scott Hocknull and Robyn McKenzie.

Studying the fossils led the paleontologists to conclude that the bones examined belong to a new species, which was named Australotitan cooperensis. According to their estimates, this titanosaur could be between 5 and 6.5 meters tall at the hip and between 25 and 30 meters long. The weight estimate is vaguer and ranges between 23 and 74 tons. This makes it the largest dinosaur discovered in Australia so far.

According to Dr. Scott Hocknull of the Queensland Museum, discoveries like this are only the tip of the iceberg. Many other dinosaur fossils have been discovered in Australia in recent years and their study could rewrite the history of the area reconstructing the ecosystems that existed in the dinosaur age. The relationships among different species such as those among titanosaurs help to understand their evolution and the environmental changes that occurred in the distant past. 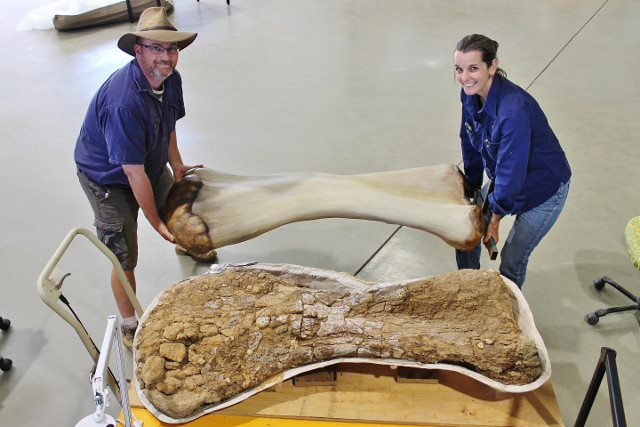