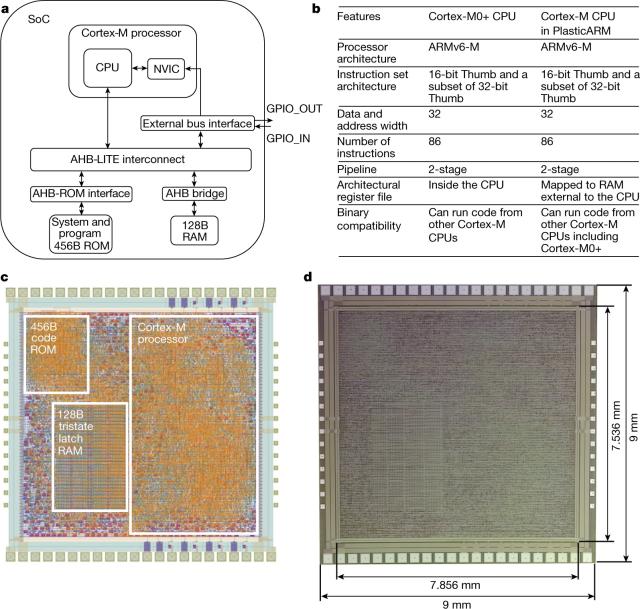 An article published in “Nature” reports the creation of a flexible microprocessor based on plastic materials instead of silicon. A team of ARM researchers developed this processor that was called PlasticARM also because its Cortex-M0 core is based on ARM architecture, precisely ARMv6-M. It’s an extremely limited processor in its performance, as it has a frequency of 30 kHz and supports up to 128 bytes of RAM and 456 bytes of ROM. The aim was to produce a fully functional flexible processor so this is a starting point from which to develop processors for use in fields where flexibility is important such as wearables and other products connected via the Internet of Things such as medical devices.

The spread of devices such as wearables or medical devices that are sometimes even inserted into a patient’s body spurred research into flexible microprocessors. The microprocessor manufacturer ARM began exploring this possibility in 2013 together with PragmatIC. The first PlasticARM prototype was produced in 2015 but at the time it wasn’t possible to produce a fully working flexible microprocessor. Some advances changed things.

After the first experiments, ARM directed research on the PlasticARMPit project to build a sort of electronic nose. PragmatIC continued to develop its technologies and last year announced the FlexLogIC system to produce flexible integrated circuits. The old team that developed the first PlasticARM tried again using the progress made in recent years and this time the result was a fully functional non-silicon ARM processor.

The image (Courtesy Biggs, J., Myers, J., Kufel, J. et al. / Nature. All rights reserved) shows the architecture of PlasticARM’s SoC (a), the features of the CPU used in PlasticARM compared to a conventional CPU with a Cortex-M core (b), the layout of PlasticARM (c) and PlasticARM’s micrograph showing its dimensions (d).

Wearable devices and devices for the Internet of Things don’t require great computing power but the PlasticARM processor is really limited even for that type of application with its 30 kHz frequency and support for up to 128 bytes of RAM and 456 bytes of ROM. This result was useful to prove that it’s possible to create a flexible microprocessor using plastic instead of silicon without claiming to have performance comparable to that of commercial processors. The researchers mentioned Intel 4004, considered the first microprocessor in history: it had performances that today are considered ridiculous but 50 years ago it opened a new era in the field of computer science.

Flexible microprocessors with performance comparable to the ones currently used in fields where flexible microprocessors are useful must be produced for the PlasticARM project to be successful. The potential is certainly interesting, also because the production costs of these microprocessors are lower than those in silicon. According to ARM, this technology could lead to the realization of the full potential of the Internet of Things and open new frontiers in the production of new portable and wearable medical devices.