An article published in the journal “Science of Nature” reports the identification of a new species of dinosaur with characteristics similar to birds that lived about 90 million years ago, in the Cretaceous period, in today’s Patagonia, Argentina. A team of researchers led by Matias Motta named it Overoraptor chimentoi, a name that reminds more of predatory dinosaurs than birds. In fact, some of its characteristics are typical of that type of dinosaur, with legs suitable for running and a claw similar to that of Velociraptor on its second toe. Instead, its arms have characteristics much closer to bird wings, and this suggests that it’s one of the species closest to birds among the various known raptors. 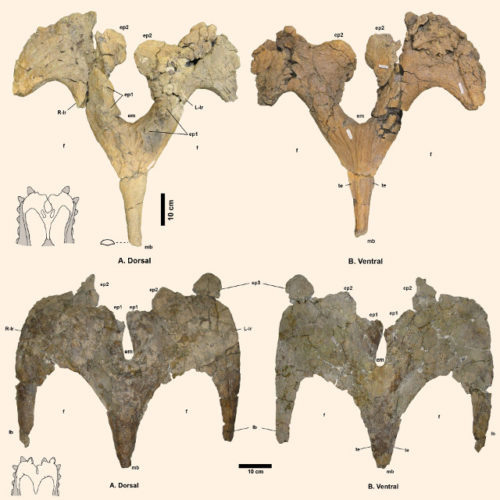 An article published in the journal “PeerJ” reports the discovery of two species of horned dinosaurs that lived about 75 million years ago, in the Cretaceous period, in today’s New Mexico, USA. Dr. Denver W. Fowler and Dr. Elizabeth A. Freedman Fowler examined fragments of skulls discovered in the Kirtland Formation, New Mexico, and attributed them to two hitherto unknown species of herbivorous dinosaurs from the ceratopsid family naming them Navajoceratops sullivani and Terminocavus sealeyi. According to the two researchers, these are transitional species between two previously known species: Pentaceratops sternbergii and Anchiceratops ornatus. This could also be true for a third possible species that appears to belong to the same group even if researchers haven’t identified it with certainty due to the fragmentary nature of the fossils discovered. 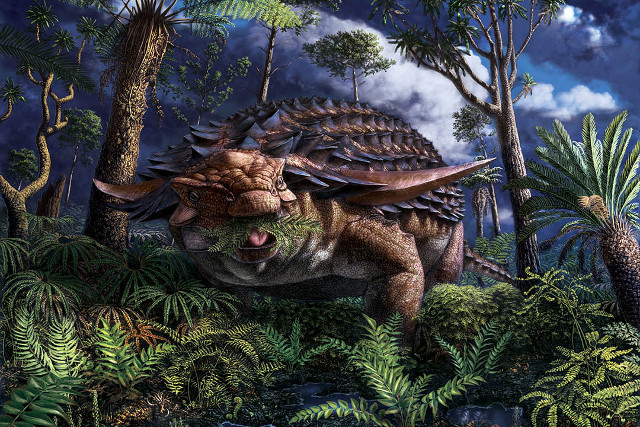 An article published in the journal “Royal Society Open Science” reports a study on the last meal of the only known specimen of Borealopelta markmitchelli. The exceptional conservation of this armored dinosaur fossil, a nodosaurid ankylosaur, has also made it possible to find what is by far the best-preserved dinosaur stomach discovered so far. This allowed a team of researchers to examine this stomach and its contents, a mass the size of a soccer ball. The result is definitive evidence of the diet of these herbivorous animals and offers much more information on the interaction with their environment than just the skeleton. An article published in the journal “PLOS ONE” reports a study on the locomotion capabilities of the dinosaurs of the theropod group, and in particular of more than 70 species belonging to the carnivorous groups Tyrannosauridae, which includes T. rex, Allosauroidea and Ceratosauridae. A team of researchers considered various physical characteristics to evaluate the allometry impact on those dinosaurs’ ability to run and the limiting effect of their size, aspects that are generally overlooked. One conclusion is that large predators such as T. rex had the advantage of efficiency thanks to their long legs, not of speed as previously thought. An article published in the “Scientific Reports” journal reports a 3D reconstruction of some of the oldest known dinosaur embryos, which belong to the species Massospondylus carinatus. Kimberley “Kimi” Chapelle, Vincent Fernandez, and Jonah Choiniere subjected the fossils to a very special CT-scan, an exam that was conducted at the European Synchrotron Radiation Facility (ESRF) in Grenoble, France, using an 844-meter-long particle accelerator. The result is that the eggs containing those embryos fossilized when they were at about 60% of their development, which is similar to that of some of the closest relatives of the dinosaurs existing today: crocodiles, chickens, turtles and lizards.