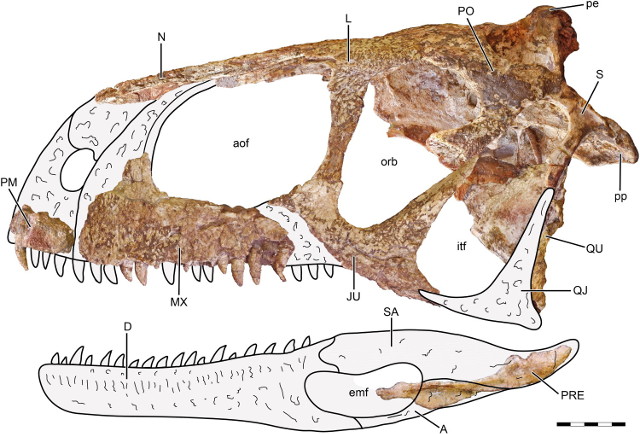 An article published in the “Journal of Vertebrate Paleontology” reports the discovery of a carnivorous dinosaur that lived about 80 million years ago in today’s Argentina. A team of researchers led by paleontologist Federico Gianechini of the National University of San Luis named it Llukalkan aliocranianus after examining a partial skull discovered in the Bajo de la Carpa Formation. The new species and the new genus have been attributed to the Furileusauria group, part of the abelisaurid family, widespread in the ancient subcontinent Gondwana. The examination of the uncovered bones suggests that it had better hearing than the other abelisaurids.

For years Argentina has been proving to be a land rich in fossils, especially Patagonia. Often, these are partial skeletons, a common problem in the field of paleontology that can make it difficult to classify a new species and recognize its relatives. In the Bajo de la Carpa Formation, several carnivorous dinosaurs of the abelisaurid (Abelisauridae) family have been discovered that were probably top predators in their ecosystems. In the Cretaceous period, in the Northern Hemisphere there were tyrannosaurs at the top of many food chains, in the Southern Hemisphere there were these distant cousins ​​of theirs, smaller but still endowed with sharp teeth, big jaws, and an excellent sense of smell.

The partial skull discovered in the Bajo de la Carpa Formation, a fossil cataloged as MAU-Pv-LI-581, was examined in various ways, including by subjecting it to a CT-scan in order to create a 3D reproduction. The top image (Courtesy Gianechini et al.) shows a reconstruction of the skull and the jaws of Llukalkan aliocranianus with the available bones in their position and a drawing showing the likely appearance of the unavailable bones.

Examinations of the fossil which was named Llukalkan aliocranianus showed similarities with other species which led to inclusion in the Furileusauria group. In particular, the researchers noted similarities with the species Viavenator exxoni, also discovered in that area and described for the first time by some members of Dr. Federico Gianechini’s team.

Based on the similarities between Llukalkan aliocranianus and other abelisaurids, in particular Viavenator exxoni, the researchers estimated that this dinosaur could reach a length of around 5 meters, a little less than its cousin’s.

The peculiar feature discovered in Llukalkan aliocranianus is the structure of its ear. An air-filled part not found in other known abelisaurid dinosaurs suggests that this species had better hearing than its cousins, similar to that of crocodiles.

Previous Post: Blackfish City by Sam J. Miller
Next Post: Evidence found that trilobites had gills on their legs