An article published in the journal “Proceedings of the National Academy of Sciences” reports a study on Neanderthal migrations to Siberia. A team of researchers excavated the Chagyrskaya Cave in the Altai Mountains in Siberia, finding 90,000 artifacts and 74 Neanderthal fossils along with bone tools, animal and plants remains in deposits dated between 49,000 and 59,000 years ago. The tools have distinctive characteristics remarkably similar to those of Neanderthal artifacts from Eastern Europe, while nothing like this has been found at other sites in the Altai Mountains occupied by Neanderthals. Such archaeological evidence, combined with genetic studies on well-preserved Neanderthal fossils, indicate that there were at least two migrations of these hominins to Siberia, the first one over 100,000 years ago.

Neanderthals inhabited Europe and western Asia between 430,000 and 40,000 years ago, but the history of that occupation is proving complex thanks to the reconstruction of various migrations. In various cases, research focused on the Neanderthals who lived in Siberia and three caves represent the sites where the greatest amount of fossils and artifacts was found: Chagyrskaya, Okladnikov and Denisova. The last one is famous for having given its name to another species of hominins who also lived in that area making research more complex due to the presence of artifacts produced by different species and for the interbreeding between the two species.

The isolation and cold conditions of those Siberian sites made it possible to find Neanderthal bones from which it was possible to obtain pieces of DNA that are very precious to try to understand the relationships among the various populations. At the same time, archaeological research has been very useful to collect independent information on the artifacts of the different populations.

The work was conducted in collaboration between the Siberian branch of the Russian Academy of Sciences and the German Friedrich-Alexander-Universität Erlangen-Nürnberg. In fact, the comparison was made between the artifacts of the Siberial Neanderthal populations and those of sites in Bavaria, dating back to what in jargon is called the Micoquian industry. The similarities between the artifacts discovered in the Chagyrskaya cave and those of the Bavarian sites are remarkable while artifacts of that kind haven’t been found in other Siberian sites. The bottom image (Courtesy Kolobova et al) shows some Micoquian artifacts seen from different points of view together with drawings that illustrate their characteristics.

Analyzes of DNA recovered from various Neanderthal bones confirm that the oldest populations that lived in the Altai Mountains weren’t associated with the ones that produced the Micoquian artifacts. In their case, the main problem is to distinguish the Neanderthal artifacts from the Denisovan ones because the two species lived together at least for some time but their tools are still different from the Micoquian ones.

For Professor Kseniya Kolobova of the Institute of Archaeology and Ethnography, Siberian Branch of the Russian Academy of Sciences, the striking similarities between Micoquian tools and those of the population of the Chagyrskaya cave was the most surprising discovery. The various analyzes suggest that those Neanderthals came from an area between Crimea and the North Caucasus. That’s a journey that probably occurred around 60,000 years ago between 3,000 and 4,000 kilometers, truly remarkable for the time.

Neanderthals probably traveled following the herds of animals they hunted. However, these are reconstructions that need more studies, for example looking for more tools produced by the Neanderthals on the path of these movements. Such studies that are putting together paleontological analyzes based on genetic studies of the bones found and archaeological analyzes based on the tools found. These multidisciplinary studies are slowly confirming that the history of humanity, either Homo sapiens or Neanderthals, is a history of migrations. 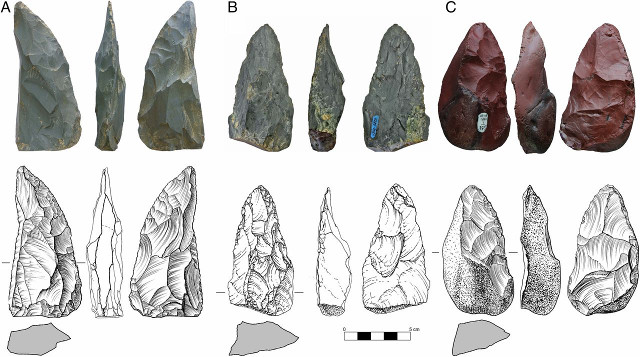