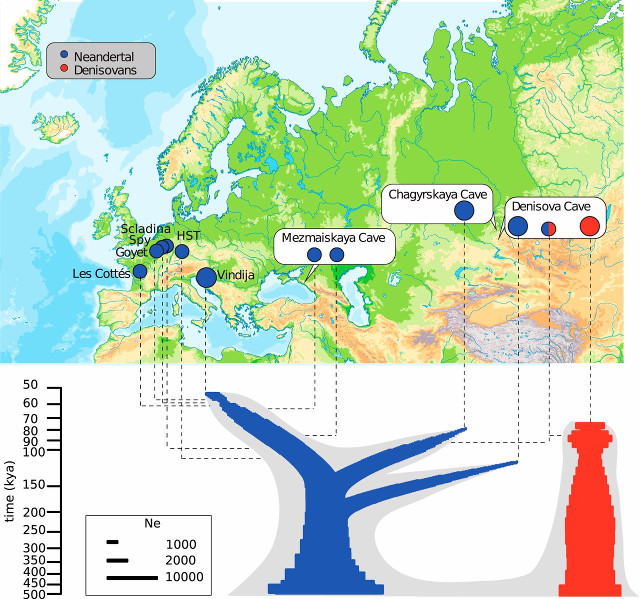 The Max Planck Institute for Evolutionary Anthropology is at the forefront of paleogenetics, the application of genetic techniques to extinct species to be able to obtain at least fragments of DNA from very old bones. Over the years, its researchers have often been authors of researches on the subject presenting the results of the sequencing of many ancient hominins. The team that carried out this new research includes Matthias Meyer and Svante Pääbo, two of the most important paleogeneticists not only of their institute but of the whole world.

These developments in genetic techniques made it possible to recover DNA fragments from different Neanderthals belonging to various populations, but often these are limited parts due to bone degradation. In two cases the bone conservation allowed to recover high-quality DNA: one who lived in Vindjia Cave, in today’s Croatia, and one who lived in Denisova Cave, in Siberia, famous above all for the discovery of bones of another species of hominins. A phalanx discovered in 2011 in Chagyrskaya Cave still contained enough DNA to obtain high-quality sequencing.

Chagyrskaya Cave is about 106 kilometers from Denisova Cave, a short distance yet the two caves were inhabited by genetically distinct populations. Those and other genetic characteristics confirm that the Siberian Neanderthal populations lived in small isolated groups, unlike other populations of the species existing at the time, which include Denisovans and Homo sapiens.

The woman from Chagyrskaya Cave was more closely related to the Neanderthals who lived in present-day Croatia than to the other population who lived in Siberia some 40,000 years earlier. The top image (Pääbo et. Al / PNAS) shows a reconstruction of the relationships between the various populations of Neanderthals and, in the Denisova Cave, also the interbreedings with the Denisovans.

The history of the Neanderthals is also made up of various migrations, a theme at the center of a research reported in another article published in the journal “Proceedings of the National Academy of Sciences”, in that case in March 2020.

Interesting information also came from the analysis of some genetic characteristics related to the brain. Fabrizio Mafessoni, also from the Max Planck Institute for Evolutionary Anthropology and lead author of this study, explained that the genes expressed in the brain striatum during adolescence show more changes that altered the amino acid results when compared with other areas of the brain. This suggests that the striatum may have played a unique role in Neanderthals and it’s a part of the brain that coordinates various cognitive aspects such as planning, decisions, motivation, and reward perception.

Each new sequencing of a Neanderthal offers new information about this species. In the case of high-quality sequencing, the information is much greater than in partial sequencing. This result also helps to better identify the possible interbreedings of that population with Denisovans and Homo sapiens. The discovery of Neanderthal genes present mainly in the current inhabitants of Europe shows a part of the history of those interbreedings. The specific characteristics of the Neanderthals show who they were, in this case also offering data to try to understand how they thought.

Previous Post: Solo 8 is a quadruped robot that anyone can build thanks to the project’s free license
Next Post: Transmission by Morgan Rice