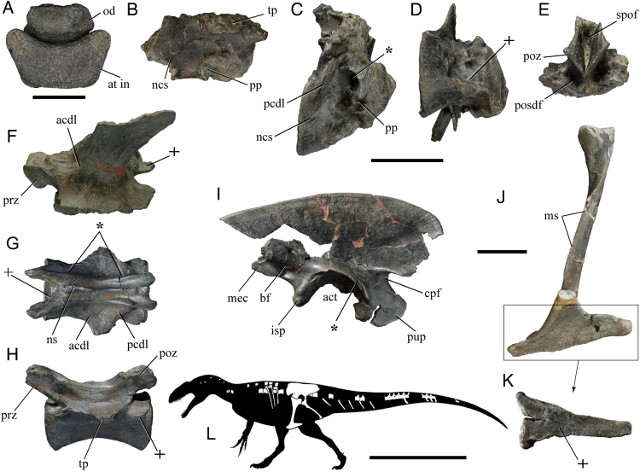 Carcharodontosaurians (Carcharodontosauria) were among the major predators during most of the Cretaceous period. Over the decades their classification has been modified following the discovery of new fossils that led to redefining the relationships between various genera. Two partial skeletons, although discovered in different places and times, have been attributed to the new species Lusovenator santosi after their examination.

As often happens in cases of partial skeletons, the reconstructions are also based on estimates made taking into consideration similar species, in this case, other carcharodontosaurians. According to the researchers, Lusovenator santosi was about 3.5 meters long, about a meter tall, and was bipedal. The top image (Malafaia et al, doi 10.1080/02724634.2020.1768106) shows a silhouette of this dinosaur indicating which bones were found along with their reproduction.

Lusovenator santosi is the oldest carcharodontosaurian discovered in what used to be the supercontinent Laurasia. The scarce availability of fossils related to this group of dinosaurs dating back to the Jurassic period makes it difficult to reconstruct their family tree. Every discovery can bring crucial information to understand their evolution and diversification.

Few Lusovenator santosi bones have been discovered, but they’re enough for the researchers to conclude that a diversification of these allosaurs occurred before the Cretaceous period. Going beyond the group of carcharodontosaurians, the conclusion is that, at the time in which it lived, there was a remarkable diversity of theropod dinosaurs in today’s Iberian peninsula.

Previous Post: DNA sequencing of six bat species to discover the origin of their “superpowers”
Next Post: The Shrinking Man aka The Incredible Shrinking Man by Richard Matheson