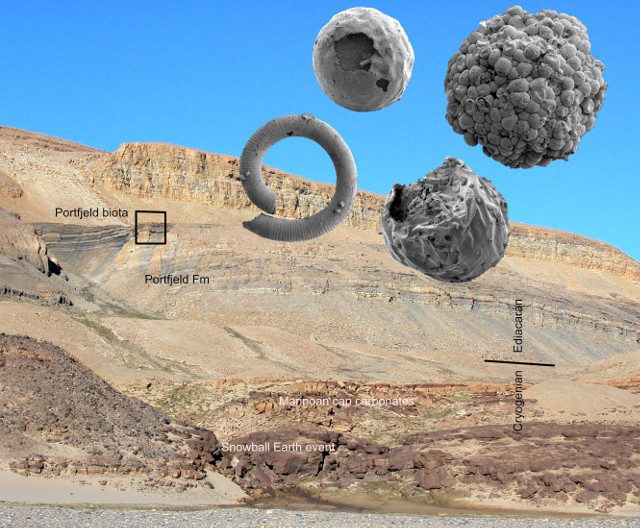 An article published in the journal “Communications Biology” reports a study on microfossils with an age of up to 570 million years discovered in present-day Greenland. A team of researchers led by paleontologist Sebastian Willman of the University of Uppsala, Sweden, examined these microfossils, which have characteristics that suggest they may be animal eggs and embryos. They show similarities with other microfossils discovered in the Doushantuo Formation, in China, with an age close to 600 million years. This means that they were organisms that in such an ancient era were widespread all over the world and could be the remains of the first animals.

The presence of extensive documentation concerning animal fossils in the Cambrian period, which began just over 540 million years ago, indicates that they emerged earlier, probably in the Ediacaran period. The problem is that the fossils of the organisms that lived in that epoch are often so different from the later ones that their classification is at the center of one of the greatest controversies in the field of paleontology.

A discovery that could be useful to understand the evolution of the first multicellular organisms and their subsequent differentiation that also led to the emergence of animals came from the Portfjeld formation in northern Greenland. The image (Courtesy Sebastian Willman et al / Uppsala University. All rights reserved) shows the Portfjeld formation and some of the microfossils found in that area.

In rocks dated 560-570 million years ago, in the Ediacaran period, microfossils were found of what could be eggs and embryos of animals that lived in what were then shallow waters near the coast. The electron microscope examination showed a level of conservation that made it possible to study the single cells that compose them.

The microfossils discovered in Greenland have very variable characteristics, and this convinced the researchers that in the Ediacaran period there was already a high complexity in those life forms. At the same time, the microfossils that could be eggs and embryos dating back to around 600 million years ago were discovered in southern China, in the Doushantuo Formation, over thirty years ago. They show many similarities with those discovered in Greenland despite the fact that there are a few tens of millions of years of difference between the two sites. According to the researchers, this means that those organisms were widespread in at least two paleocontinents that existed at the time and possibly throughout the world.

Northern Greenland is a remote area with the ancient seafloor still practically unexplored, but this study shows that it may still contain many other fossils in excellent condition. Research in that area is not easy, but could offer important new information to understand the development of the first animals.