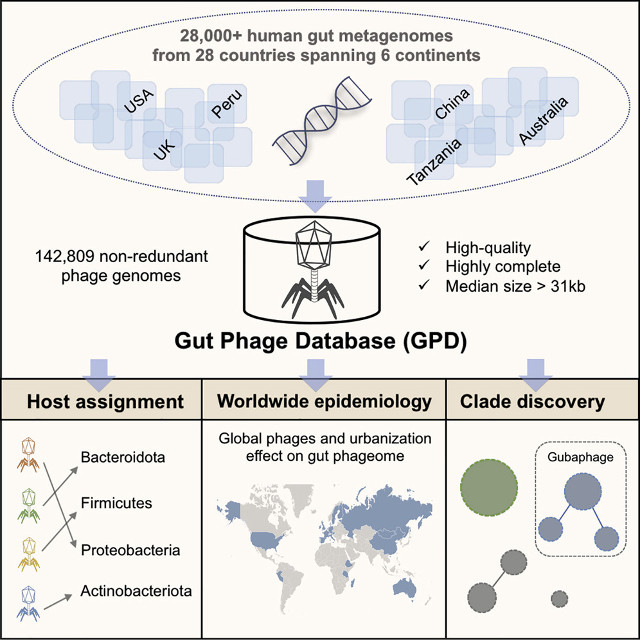 An article published in the journal “Cell” reports the discovery of over 140,000 bacteriophage viruses that live in the human guts, added to a new database called the Gut Phage Database (GPD). A team of researchers led by Dr. Luis Camarillo-Guerrero of the Wellcome Sanger Institute analyzed more than 28,000 gut microbiome samples collected from different parts of the world to detect bacteriophage viruses using metagenomics. Over half of the viruses identified were unknown so far. These viruses attack bacteria, so they can help the body’s immune responses.

In recent years, more and more studies are showing the complexity of the so-called gut microbiome, an environment that revealed a biodiversity that was unthinkable not many years ago. Those studies are complex because the gut is an environment with particular characteristics and the samples must be taken carefully also to avoid contamination. From this point of view, too, there has been a lot of progress, and the authors of this new research have been able to examine over 28,000 samples collected all over the world.

The individuals from whom the gut microbiome samples were collected were healthy. Bacteriophage viruses are in fact harmless to humans and can be part of the actual ecosystem that exists in the guts. Many scientists are showing great interest in the gut microbiome also from a medical point of view studying its influence on the immune response and on the development of certain diseases following imbalances caused in the microbiome.

Metagenomics combines the possibility of taking samples of biological organisms in the environment in which they grow with the use of computer tools to analyze them, in this case at the genetic level. The approach of the authors of this study allowed to obtain surprising results that showed a huge diversity of bacteriophage viruses in the samples examined for a total of over 140,000 different species. These viruses are very diverse, so much so that they belong to different phyla, in some cases to completely unknown groups.

The results of this study were used to create the Gut Phage Database (GPD). The image (Courtesy Camarillo-Guerrero et al.) illustrates the diversity of the viruses discovered in terms of the nations where the samples were taken, the groups they were assigned to, and the completely new group discovered that was named Gubaphage.

This study offers a method to more comprehensively study viruses that are part of the gut microbiome. Knowing them well will help to understand the relationships among the various species and how they are spread around the world, all useful information for medical research as well. A good knowledge of these viruses and the other organisms that make up the microbiome is essential to understand their influence on our health.

Previous Post: The sequencing of three mammoths’ DNA shows the complex history of these animals
Next Post: Dune by Frank Herbert