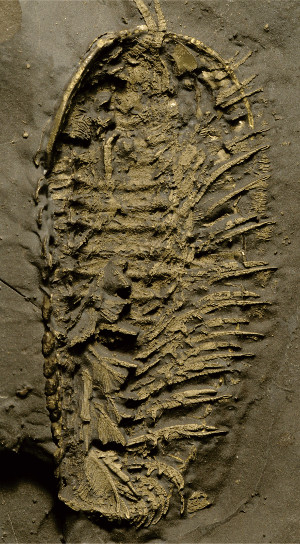 An article published in the journal “Science Advances” reports a study on trilobites that offers evidence that in the upper branch of these ancient arthropods’ limbs there were gill-like structures that were used for breathing. A team of researchers led by Jin-Bo Hou of the University of California at Riverside (UCR) subjected exceptionally preserved specimens belonging to the Triarthrus eatoni and Olenoides serratus species to CT scans to study their anatomical details. The results led to their conclusion concerning the presence of gill-like structures in the upper branches of their legs which they used to breathe.

The limbs of arthropods can be biramous or uniramous. Trilobites had biramous limbs which means they were divided into two branches. In certain arthropods, the upper branch of a limb can have a gill and therefore also be used for breathing, and this has been at the center of discussions regarding trilobites and other arthropods that lived in the Paleozoic era. The problem with these organisms is that exoskeletons fossilize well, so trilobite fossils are very common, but soft tissues are rarely preserved. The rare cases of conservation of trilobite tissues offer information otherwise impossible to obtain.

For this study, the researchers used some of the very rare specimens of trilobites fossilized in pyrite that also preserved the anatomical details of their legs. The specimens belong to 2 of the over 22,000 species of this taxonomic class of marine arthropods which had extraordinary success in the Paleozoic era. The species Triarthrus eatoni lived about 450 million years ago, in the Ordovician period, while the species Olenoides serratus lived about 500 million years ago, in the previous period, the Cambrian.

By subjecting the specimens to a CT scan it was possible to create a 3D reproduction that allowed to examine the anatomical details of their legs. This led them to conclude that in the upper branch of the legs there were gill-like structures that were used for breathing. Those are structures very similar to those of today’s marine arthropods such as crabs and lobsters.

The very rare specimens of trilobite very well preserved and modern technologies made it possible to obtain details of the legs sufficient to understand their anatomical structures. There were discussions about the function of structures that were difficult if not impossible to reconstruct because there were paleontologists who believed that they helped trilobites in swimming or digging in the seabed. One reason for the discussions was that the top of a leg doesn’t seem like an ideal place for a gill. Understanding how that structure developed in that location may require a better understanding of the development of the environment in which the first arthropods emerged. That’s really complex research after hundreds of millions of years, as it’s linked to changes of various kinds.